Dancing In The Rain

We loaded up the cameras yesterday and headed to Highway 20 West to photograph spring flowers. The clouds had broken up during the night but the new storm was coming in, promising big puffy cumulus and dark, ominous nimbus stratus highlighted by the sun here and there.

Spring in northern California is incredibly beautiful. Every tone of green is evident, trees are filled with pastel blossoms and wildflowers abound.

Have you ever tried to photograph delicate poppy in hurricane winds?  I know, it's an exaggeration, but the further south we drove, the higher the winds grew. When we spotted a landscape begging to have it's picture taken, the car doors were ripped from out of our hands. Gusts would try to knock us over.

The clouds got thicker, darker, more threatening with each mile we traveled.

Forget getting to Highway 20; we made an impromptu turn in Willows and headed west.  We were early and saw only the very first, impatient wildflowers but it would have been impossible to snap a shot of any of them except as a block of color.  Individual flowers were rocking out in the breeze!

Now and then, just as one of us would get a good foothold to hold our balance from the force of the wind, then focus, a gust would spray the lens with a couple of rain drops.  We did a lot of laughing and swearing yesterday. Frank got some awesome photos and I can't wait to see them downloaded, of course, he IS the professional so he got the really good lens and he remembered his tripod. His photos are in focus. Mine, well, mine are different, yeah, that's it, they're different! 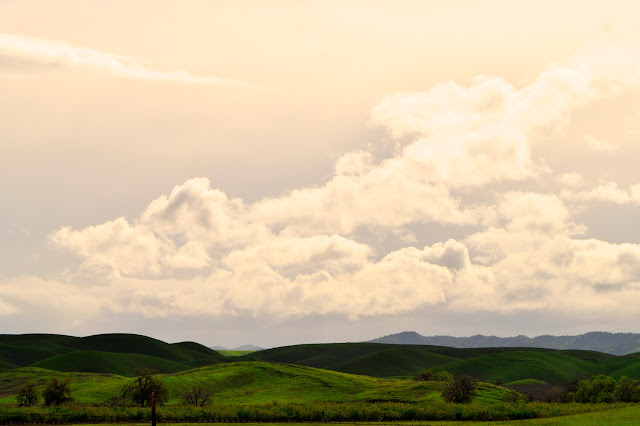