The old To-Do List is only slightly whittled down.

I finished antiquing and waxing two tables. I didn't get to bathroom cabinets, only because I couldn't make a final decision on colors. I'm leaning towards grey but the bohemian in me is resisting.

I love the look of both. Just enough dark to take the edge off of the glaringly flat look of chalk paint. A little bit of age and a little bit of satiny glow. 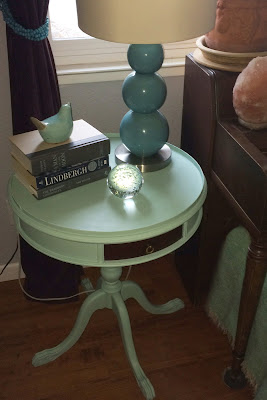 I was so overcome with enthusiasm to take photos that I didn't tuck away any of the electrical cords. Oh well, my photographic skills are not in interiors!!! 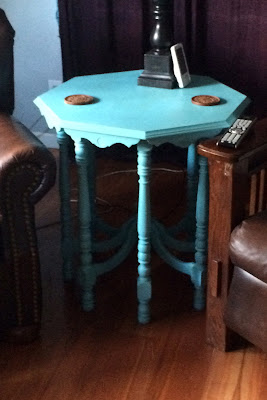 My little octopus table looks washed out in photo but it does have the look of aging.  I'm ordering a thick shelving glass top for it. Neither Frank nor I can be trusted to use coasters. We try but why take chances.

Today's list: Visit parents, swim.  Bathroom cabinets will have to wait. Frank is taking me out to dinner and a movie tonight. Sadly, no wine with dinner.

Tomorrow a torn rotator cuff and torn tendon will be repaired. I will be sent home with a great excuse to kick back and read, guilt free!

Nervous a little? I am.

I attended my granddaughter's high school football game Saturday evening. Exciting game, screaming, cheering and with her school scoring 61 (or was it 68) points, I raised my arms in support way too many times. Finally spent the last 10 minutes sitting on my left hand in an attempt to impede spontaneous and propitious encouragement. Let's just say my left arm, much like the rest of me, has authority issues!

I'm predicting there will be little, if any, activity at Wandering and Wondering for a little bit. One-handed typing is not my strong suit, just no patience for a one-handed search for letters. My typing skills are all muscle memory, so looking for a p or q just won't do.

I will be visiting your blogs, but again, may not type out responses...mostly because one never does know what pain-medication wisdom will float to the top, does one?

Need to clean out fridge today, paint bathroom cabinets and wax newly painted side tables. Painted them in turquoise and sea green hues of chalk paint. Much too bright...need antiquing wax coats.

Tomorrow I plan on making a couple of casseroles to freeze, or maybe just floating in the pool. Still not decided on being a responsible adult or locking the mature-adult-me in the pantry and taking my inner child on a last fling before short-term disability. To be honest, the pool is calling the loudest, and my inner child keeps whispering that we can over-power the mature adult. Comes from years of practice and, frankly, the mature-adult me has been exercised very little!

I'm sincerely hoping at the end of this surgery and accompanying physical therapy, I can take a class at the college and when the professor asks a question, I will be able to hysterically wave my left arm and yell, "I know, I know! Pick me, pick me!" 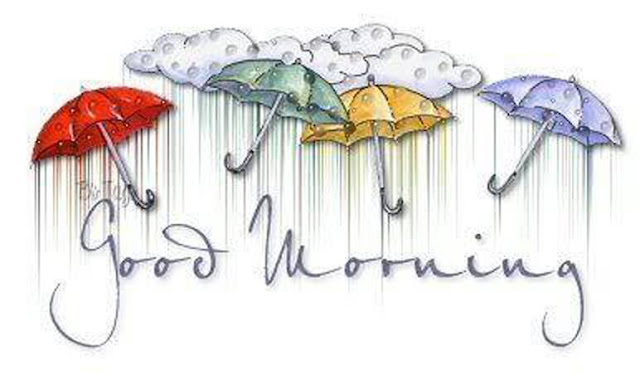 Loving the smell of rain this morning.

Hello petrichor! Oh, how I have missed you.

My hair and clothes smell like I've been sitting around the campfire, which is not bad but it didn't come with Bailey's and coffee in the morning, charred hot dogs and cold beer at night!

We tried to dodge the smoke and ended up in even thicker clouds of it. We visited the Inter-Mountain Fair in McArthur. The folks there wanted Frank available for a couple of hours of Q & A about photography and why the photos that won, well, won!

Beautiful photography, super friendly people but high point of the fair (for me) is always the quilts. This year did not disappoint!  Such talent!

We drove to Tule Lake Refuge and tried to photograph birds.  The smoke proved to be an an enormous challenge, Visibility was probably just under a half mile. 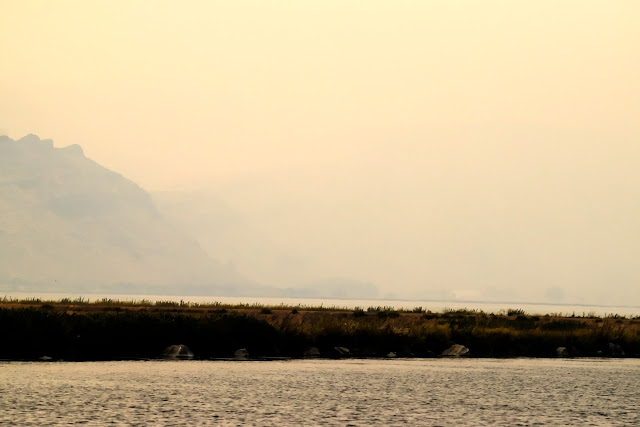 Mountains virtually disappeared within half a mile of us.  The sun was actually red most of the late afternoon and evening.  In photo-speak that means color saturation is MIA.

I found some flowers along the edge of the lake that the butterflies were loving. I still have to identify the plant. If any of your recognize it, fill me in! 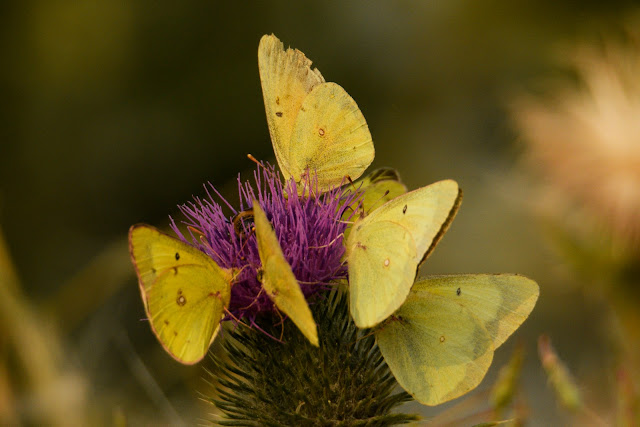 So that we were both on the side of the lake, Frank sat in the back seat of the car, I drove. I drove very, very slow so that we wouldn't scare off any birds, or other wildlife. Also a good idea because the roads through and around the lake are washboards...detrimental to kidneys at speeds higher than 2mph!

There were a flock of blackbirds (on the right side, of course). They seemed to be auditioning for Alfred Hitchcock photos. Who can resist scary? 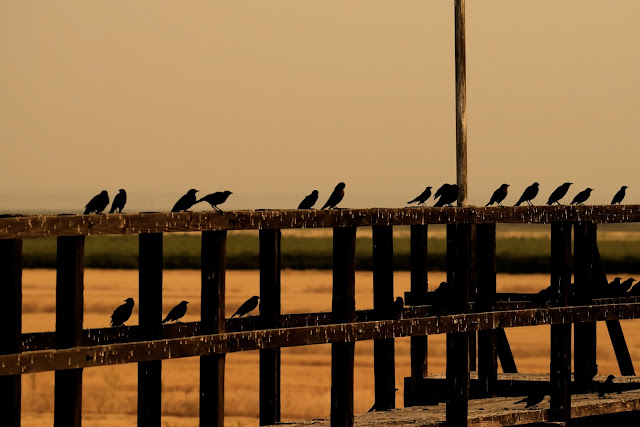 We discovered a little family of Grebes. Two parents and three babies. When we first saw them two babies were riding on Mom and one was on Dad. The little ones were off and on, much like three year old humans! 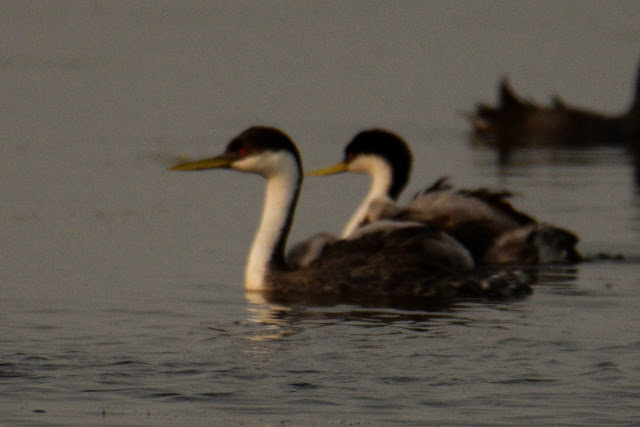 After playtime, Mom dumped the babies off her back and took off to do some fishing. 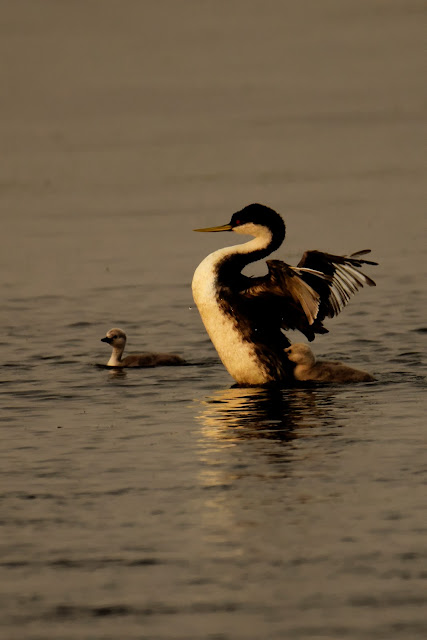 It was so cool to watch as the parents took turns fishing, then returning with fish in bill (or beak?) to feed babes and partner.

Sometimes the profile of Grebe made me think of Nessie in Scotland. Maybe she is just a big-ass Grebe! 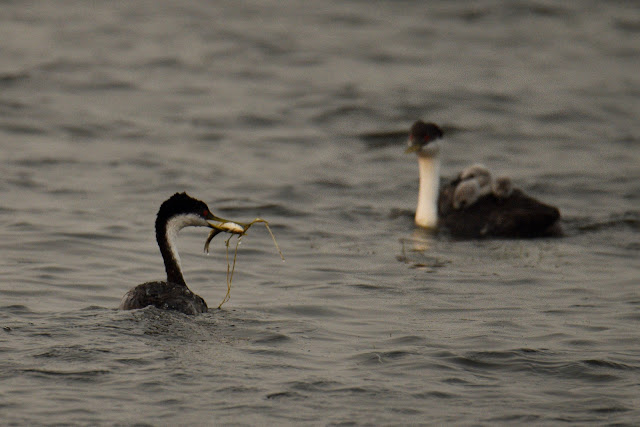 The geese started taking off in the later part of the evening. Was only 94 degrees so cool enough to make a couple of miles towards winter home. Had been 108 during the day. 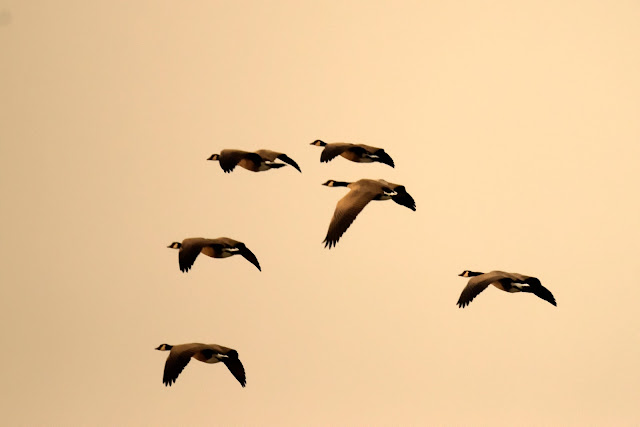 As you can see, there was no blue in the sky, so no blue reflection in the water.  We can't wait to go back when the skies clear.

The sun started to set. In the two photos below, the sun is almost about to drop behind the mountains which are invisible through the smoke.  We took the last two photos and headed for Klamath Falls, and immediately got lost. 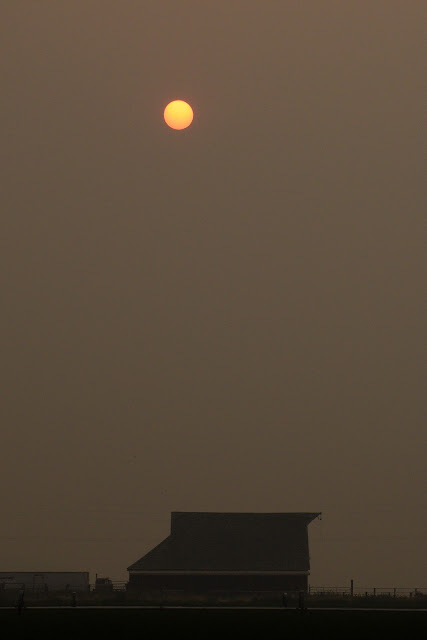 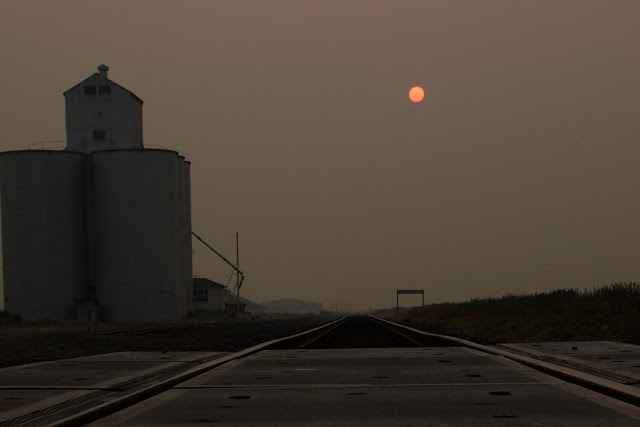 Getting lost is sometimes as much fun as photography!

How did you spend your three day weekend?
13 comments: