Time to tick off the boxes of surviving being exiled for the good of the realm.

We made it! Vaccinated, never got the dreaded virus and relieved that our world is only mostly a mess!

We actually thrived through social distancing said the introvert) and fell even more in love with each other!

We finished remodeling the guest bathroom.(Except painting ceiling but if you don't look up and just take care of business, it looks done).

The remodel plans for master bath were cut back to painting, new baseboards and new curtains. Instead of knocking out old tile and shower pan for fancy new tiles, we had our dog's butt remodeled. Rex had a giant tumor which cost $3500 to removed. I do have to say, though, that his new butt is pretty dang nice...for a butt! He's doing well and is just as beautiful and loving as ever.

The Guy and I have been getting out about 3 days a week for long drives in the mountains with photos of fall color, snow covered trees and volcanos, spring flowers and now, back to airplanes bombing fires.

Frank had one of his photos featured in a local magazine in March. He also submitted six of his photos to the new court house and four were accepted for hanging in the halls! Really proud of him. Six of his wild flower photos have been chosen by the city for wrapping utility boxes around town.

I purged all the 'stuff' from my studio and have been painting again. Trying my hand at watercolors, acrylics, and furniture. My favorite is watercolor but I'm better at furniture. I'm tempted to paint my piano but might have to leave it behind in move to North Carolina and no one wants a hippie painted piano. Instead I painted a picture of my guitar...so far it's saved the piano, though never say never! 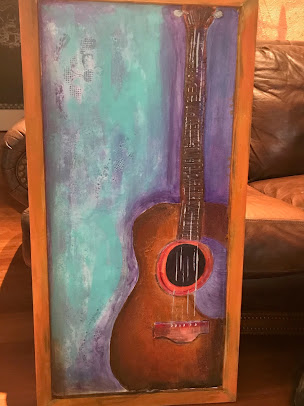 After a long, long, long time apart our youngest son and his family came up from southern California for a very nice visit. We hiked in Lassen Park one day, and had a picnic and hike in the upper Sacramento River near Castle Crags one day. Our great granddaughter joined us; youngest grandson and great granddaughter are both 7. We skipped rocks, rock jumped, slipped and fell or pretended to slip and fall in water. Temps were in high 90's that day so just laying in the water was super refreshing. Thank goodness for leather seats and towels for ride home. 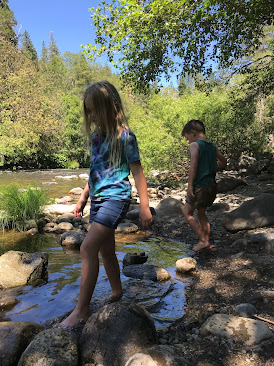 Ms. B and Lukas preparing to lose control!

It is 117 degrees at our house. Smoke from the 3 fires has gone in some other direction for the evening so deep breaths are possible...slow...deep...lazy breathing. Too hot to do anything else.

It's time for a blended margarita and another dip in the pool.

Missed you all sooooo much!