This is the High Seas, on of my Uncle Adrian's bands. He is back row, second from the right, my Uncle Bill is far right (handsome dudes, right?) My Aunt Anita's brother John is back row, second from the left. Funny, both Uncle Adrian and John were called Sonny by their families. I saw the other Sonny (John) at Uncle Adrian's funeral. He kept telling me how beautiful my mom was (over and over and over)! He must have had a heavy duty crush on her "back in the day"!

My dad took these photos for them in our living room.

The band started out as Little Al and the Uniques. Then just the Uniques. When they started touring with Jan and Dean, they got a new manager who wanted them to change their name. They became the High Seas. Uncle Bill joined the army and left the group.

Uncle Bill continued to play guitar and he had a voice like Elvis. He sang all the old Elvis songs when ever we were around. 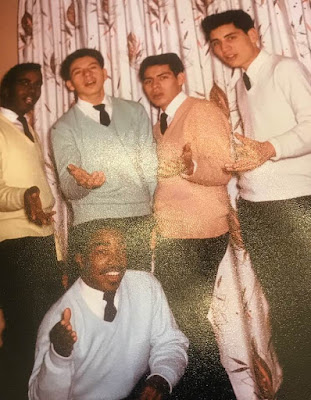