Craziness going on in the world! I'm CNN-Twitter-ABCNews-PBS-ed Out!
Need a bit of self-care, I typically self-medicate my chronic depression and anxiety with Ben & Jerry's Cherry Garcia but my thighs begged me in a dream last night to have mercy on them!
So, what can I do for the sake of my thighs and waistline? I know...random questions about things that will never be! (Sorry, gave up sanity for Lent!)
My sister posted this on FB yesterday:
A commenter announced that they would love to have their life narrated by Morgan Freeman!
That would indeed be pretty cool but I'm a woman so as much as I love Freeman's voice (and boy do I love it) I think it would be more self-affirming and less condescending to have a woman's voice in the narration department.
Who would you like to narrate your life story on the next Netflix Made-for-TV movie or do you think your life is Big-Screen-ish?
I've been around the sun 71 times. In that time I've had some highs and some lows but nothing big-screen worthy. My biography is definitely closer to TV, I mean if professional bowling has a show why not me Why not you, right?
After the first 10 minutes of national news, I flipped over to Ed Sheeran channel on Pandora, grabbed a soda, and tried to figure out who would be the voice to my ups, downs and long, long flatlines!
Helen Mirren. That's who I want! It was a tie between her and Emma Thompson. Deciding was a challenge until I figured Mirren should narrate and Thompson would play me!
Now my sisters-in-law would probably suggest it be more appropriate that Roseann Barr narrate. I haven't won a lot of brownie points with them the last couple of years! We'll leave that part out of the movie!
So, share with us.
Who would narrate your movie?
Who would be play you?
Maybe Lily Tomlin would make a better me in the movie? What actor  is a cross between Tomlin, Thompson and Cher (okay, just a little Barr)!
Next meaningless and random distraction: What characters in a movie or tv show would you hire to take Putin to the Train Station (wink wink, nudge nudge)? 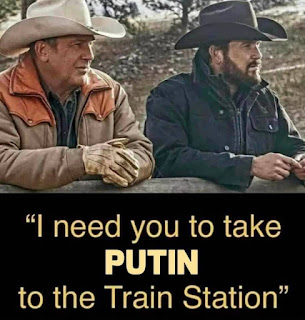