The Guy and I are seriously considering selling our home on the west coast and vaulting all the way to the east coast...Virginia, that is! Or North Carolina, or, uh, maybe just Ohio!!!!

(you'll never believe how much time it's been since I started this post...I got a little distracted!)

So, yeah, we're trying to taper off our deep love of California and our California-ness! There is a certain "west-coast vibe" that many this side of the country have, but we're up here in Northern California. This is where take-it-easy-don't-harsh-my-mellow does not exist, and actually could get you shot if you openly display anything but  rage and distrust! But this is not about that!

This is about being a couple of a certain age who need out! We have been through many huge fires in our life together and several mandatory evacuations and several more evac warnings. We've had summers when we can't swim in our pool because the smoke levels are "unhealthy"! It's weird that the news casters announce that smoke levels are high and we should remain indoors as if we liked walking the river trails inhaling small glowing embers!

Then there's the fact that in good ole California 66% of the cost of a gallon of gas is actually taxes! Yup 66%! But, again, this is not about that!

This is about PTSD and Drought and a bit of ignorance.

The evening news on March 3 announced Wind Warnings for the morning of March 4. You know the big red banner Wind Warning!

Morning of March 4 the guy takes dogs for a walk. Upon returning he states, "There's smoke rising in the north hill." I responded, "Yeah, I think they're doing a controlled burn today." (they being Cal Fire)

"Not today," responds the guy. "have you seen the wind out there?"

Fifteen minutes later on scanner there is a request for a dozer at the site of controlled burn! Surprisingly (not) the fire has jumped!

Half hour later we receive a mandatory evacuation alert on both our phones! The alert was not for our neighborhood but the fire is north of us and headed south!

Goose bumps, chest pain, tight jaw and a couple of veins throbbing in our foreheads...NOT AGAIN!

It's only March! We need to get out of here before summer!!!

They've got it under control. Evacuations have been lifted for the immediate area of fire, The sheriff's department announced that the fire was under investigation...apparently Cal Fire was hesitant on taking responsibility for burning on a High Risk day with incredibly harsh winds but too many people have scanners and heard the first couple of calls for help go out. The next day they sent out a press release announcing that a controlled burn went out of control but nothing like, "We sincerely apologize to the Peeps of Shasta County for lighting a fire on a day we warned you all not to!"

We're going to miss this beautiful area. Mountains are my best friends and people have promised me there are mountains in Virginia, though they are a little stooped like my and The Guy! 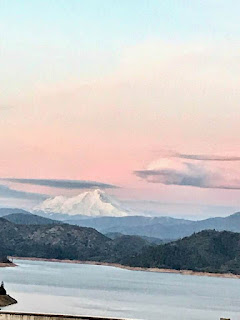 Sunset from the lookout above Shasta Dam!

I swear this is through the windshield on out way to photograph lennies on the mountain. My camera lens is never that dirty! 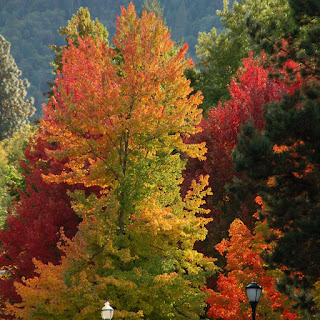 I do know that east coast color is more vibrant than ours...maybe more of it but can it really be more vibrant. 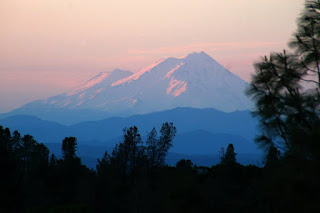 Well, until next time...The Guy is telling me there are lennies on the mountain and we gotta get up there!

p.s. I know there is a war going on, and a pandemic and apparently some kind of civil war in the U.S. but I thought we could all use a distraction!